11 questions to help you work with a health economist 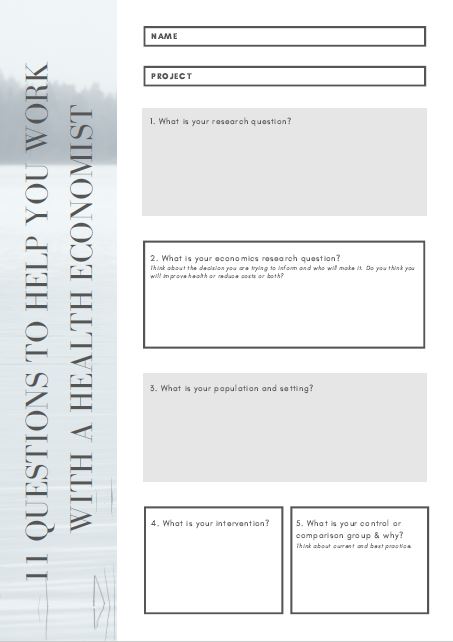 Many clinicians and researchers are hearing about the benefits of including health economics in their studies, particularly because it is something funders are increasingly looking for. However, many people may not know a lot about health economics, what it can do and what it can offer. This is compounded in many places (including Vancouver and Sydney) by a shortage of health economists and/or limited health economist availability.

By developing a checklist or worksheet we hoped to help people think about their research and how health economics might be part of it. We wanted to recognise that because it is important to talk to a health economist early in the research design process, people might not have all the answers yet, but we were hoping to avoid time wasted trying to squeeze a health economics question into a study that is already designed.

Our initial draft had five or six questions we thought were important, and I decided to run them past the #healtheconomics community on Twitter. I asked “What are the top 3 things you wish clinical people coming to a health economist with a research idea had thought about before your first meeting”. The responses came flooding in, from the serious (‘Where does the clinical uncertainty lie’ and ‘What decision are they trying to inform’) to the hilarious (‘1. What is the comparator, 2. What is the comparator, 3. What is the comparator, precisely’ and ‘1) How long until submission?, followed closely by 2) Are you kidding me?’). Overall there were a couple of key themes. Health economists wanted clinicians to have thought critically about the intervention, comparator and health resource implications of both, but they also wanted them to have started the conversation early enough that there was still scope for the health economics to inform the study design.

So the final product is a crowd-sourced worksheet of 11 Questions to Help You Work With a Health Economist. The questions cover both study design (such as intervention and comparators) and logistics (such as time frame and budget for the project). It has been produced under a Creative Commons with Attribution (CC BY) license, so please feel free to use and share it as you wish. Edited 10th October 2019 to add: If you’d like a more detailed guide to commissioning economic evaluations, you might also find this NSW Ministry of Health guide useful.

11 Questions to Help You Work With a Health Economist